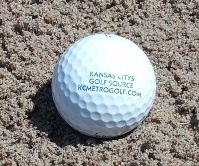 One of the most daunting shots in golf is the bunker shot. For many of us, just getting out with out chunking it and leaving it in the bunker or, just as bad, skulling it across the green and potentially into worse trouble. If you watch the pros on TV, though, you will see that they aren’t merely trying to get out, they are usually trying to get it close. That’s because they know the technique that makes the shot predictable and fairly easy to execute. Then, with practice time, they all get very adept at bunker play.

Follow these steps and get in some bunker practice and you’ll find yourself less worried about getting out and more aggressively hitting this shot to get it close.

1. The first thing that you want to do is get a good solid stance when you have to hit out of the bunker. We want to dig our feet down about an inch or two. When you do this it will keep our feet from sliding around when we are swing the club.

2. The next thing we want to do is pay attention to how far we dig our feet in because this will determine how far down we grip the club. You want to grip down on the club the same amount that we dug down in the sand with our feet. This will help you make a more solid strike in the sand and lessen the risk of hitting it heavy and maybe even leaving it in the bunker

3. With those two steps, we have our basic setup and are ready to make the swing. I think the most important part here is to keep the lower body quiet with as little movement as possible. A quiet lower body helps us make good quality swing to get the ball out of the bunker. 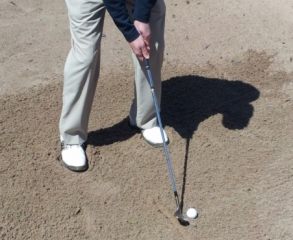 5. A final word on the swing, and one I must make because it is something I see a lot of people do incorrectly. Golfers must keep the speed of the swing or accelerate the clubhead throughout the strike. If you don’t do this, the club will stick into the sand stopping your follow through and, usually, leaving the ball in the bunker. A good image to remember to do this is to try to throw the sand onto the green. This will ensure you are not slowing down your swing during the shot and the ball will get out of the bunker and on the green. Notice in the photo how our golfer has thrown sand into the air during his shot. You can bet he accelerated through the shot to get to that finish.

A great example of this is seen in the shot below of Paul Lawrie at last year’s Ryder Cup taken by KC Golfer Magazine photographer Tim Carrigan. 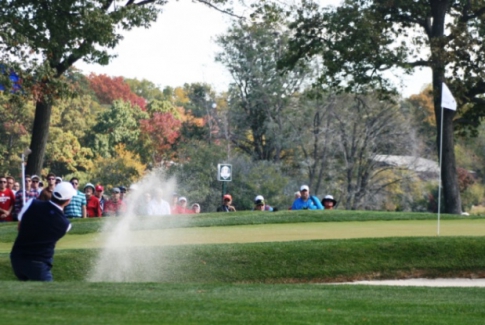 See how Paul has accelerated through the sand to his follow through, taking plenty of sand and throwing it at the green. If I recall, this shot finished within tap-in distance, allowing him to halve the hole with Brandt Snedeker before eventually winning his single match to add another point to the winning Euros’ tally.

If you practice these steps you will see that your green-side bunker play will improve. It will take attention to your setup and practice to get the feel for the shot and the feel for different types of sand. Give it a shot and if you are still having trouble, come see me at Deer Creek Golf Club.

About the Pro: Jason Rudolph started playing golf at age seven with his grandfather. Golf has always been a great family activity for Jason and his son even received his first set of golf clubs on his first birthday. Jason attended the San Diego Golf Academy where he learned golf course management and the basic principles of teaching. Over the last five years Jason has been teaching golf at Torrey Pines Golf Course in San Diego, CA. His clients have ranged from juniors to adults. This includes from beginners all the way to Tour Players. While working at Torrey Pines, Jason worked with the USGA during the 2008 U.S. Open and the PGA Tour during the Buick Invitational and the Farmers Insurance Open. In addition to teaching golf, Jason has competed in PGA Tour qualifying events and the Golden State Tour in Southern California. Prior to beginning his career in the golf industry, Jason served in the United States Army in Desert Storm.