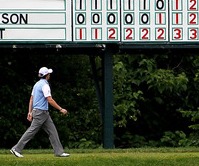 The world rankings underwent a shakeup in the top 10 after Australian Adam Scott beat out Argentina’s Angel Cabrera in a playoff duel at the Masters Tournament. Both had finished -9 to par in an extremely competitive field.

On April 14, the 32-year-old Scott finally won his first major championship by holing a 20-foot birdie on the 18th hole of regulation and downing a 12-footer for birdie on the second extra hole. The Australian’s victory earned him a $1.44 million purse with Cabrera bagging $864,000. Scott had came close at the 2012 Open Championship. His bogeys on the last four holes left him one stroke shy of Ernie Els. 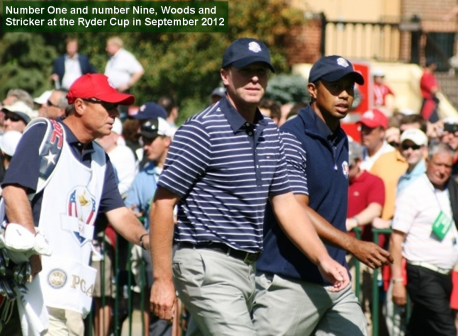 Leaderboard
Here are the current top 10 rankings in the world (through April 22): 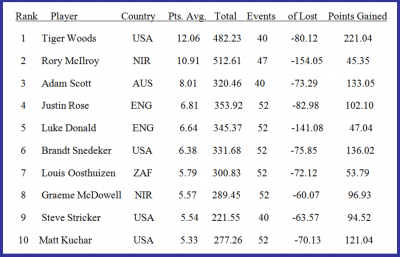 In terms of the World Golf rankings leaderboard, Tiger Woods regained his No. 1 ranking in March after a two-stroke win at the Arnold Palmer Invitational in Orlando. In that tournament, Justin Rose came in second to take home $669,600 and improve the Englishman’s status as the third-ranked player in the world right behind Ireland’s Rory McIlroy.

Woods, who took home $1.1 million for winning the PGA Tour event, had abdicated the top spot since October 2010. The sport’s most popular player had battled various leg injuries and a high-profile divorce over the past two years. Woods had fallen to No. 58 in November 2011.

The 37-year-old regained his focus and holed three eagles to win Palmer’s tournament for a record-tying eighth time. Nike immediately launched an ad campaign which proclaimed “winning takes care of everything”.

Tiger Woods reclaiming his throne at the No. 1 spot will add to his record number of weeks perched at the apex of golf. By mid-April, Woods will have spent 626 weeks in the top position. Greg Norman spent 331 weeks as the top-ranked golfer.

However, 23-year-old phenom Rory McIlroy fell further behind Woods (in terms of points) in the rankings leaderboard (as of April 22) due to the Irishman’s recent struggles in his game. Prior to the Masters Tournament, McIlroy had inched to just 0.63 points of tying Tiger Woods for the top spot.

Earnings
Here are the top 10 highest-paid players for 2012: 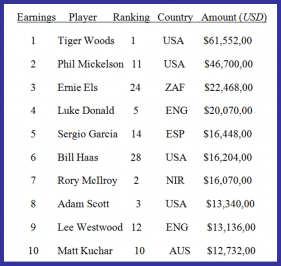 Forbes ranked Tiger Woods as the highest-earning golfer in the world at $61.2 million during 2012, with Phil Mickelson coming in at second with $46.7 million.

After claiming a $1.44 million purse for topping this year’s Masters, Adam Scott is poised to remain a top 10 earner for 2013 if he maintains a focused game for the rest of the year.