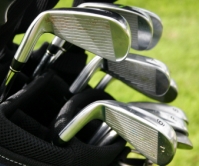 Innovations in the world of golf equipment is perhaps not as easy to detect in the irons as they are in drivers, putters, and other equipment. But they are still there. Drivers have such cool features as adjustability, multiple materials, and ever-lengthening shafts. Putters have face inserts, grooves, yes, ever-lengthening shafts (although with the recent USGA and R&A proposed rule, long shafts might quit being so common in putters). But don’t sell the 2013 lineup of new irons short when it comes to innovation. Throughout this review of some of the major manufacturers’ top offerings, you can find a lot of new technologies – all designed to help you play better golf.

The Callaway X-Hot and X-Hot Pro irons follow the rest of the X-Hot line of woods and hybrids by delivering on the promise of more distance. The face has gotten even thinner on these irons – a thinner face flexes more, meaning a ball rockets off with more speed and thus, more distance. 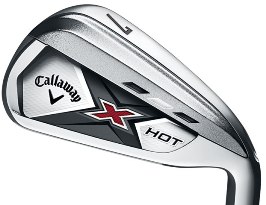 They also lowered the sweet spot to help amateurs get better performance from where they tend to hit the ball while launching the ball higher. Add in a lightweight True Temper Speed Step shaft and the irons are truly built from the ground up to provide more distance. Why do you want more distance in your irons? Well, would you rather hit an 8-iron into a tucked pin with bunkers all around, or a 7-iron? The “Pro” version packs in a few forgiveness features over the earlier RAZR X Tour model with stronger lofts (less loft) and more offset throughout the set. Better players might not necessarily want that kind of help, but Callaway has plenty of other models that can appeal as well. The Pro really delivers mid-handicappers another option with a sleeker head and not much compromise on forgiveness.

The AMP Cell and AMP Cell Pro irons from Cobra pack in a lot of technology in a good-looking package, although the Pro version is significantly different than the AMP Cell. The AMP Cell comes in the typical four Cobra colors: blue, orange, red, or silver. We really liked the understated, but tech-y look of the silver while others might appreciate the color features in a blue, orange, or red set. The face of these irons is made of a lighter stainless steel that is plasma welded to a heavier stainless body. That lighter steel improves the COR (coefficient of restitution) or spring-like effect to produce more distance. The face also has their E9 face technology – improving performance and helping the ball fly more consistently when contact is made from one of nine different spots on the face. Finally, that weight saved in the face is re-distributed around the body of the clubhead to create more forgiveness. Few irons pack as much into them while maintaining a solid look and feel. The Pro version, on the other hand, is a forged blade making it significantly different from the AMP Cell, as we mentioned. It was designed with the help of Rickie Fowler as a true Pro-style iron. Unless you hit it like Rickie, you might want to consider a club with more forgiveness.

Mizuno’s JPX 825, including the JPX 825 HD and JPX 825 Pro, represent an acknowledgement from Mizuno that often golfers look for different things in the long to mid irons as they do their short irons. Mizuno has long been known for selling mixed sets of models, and now their sets are taking on bit of that flavor as well. 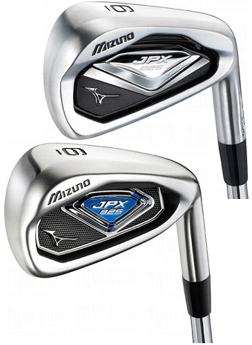 In the JPX 825, for example, the 4 through 7-iron utilize their MAX COR technology that essentially means a thin, hot face is incorporated to help the long irons hit the ball, well, long. The 8-iron through pitching wedge incorporate less distance-providing features in favor of more precision – something they call Mid COR technology. Mizuno worked on various portions of the clubhead to perfect the sound and feel of the clubs while enlargening the sweet spot through their pocket cavity and heel/toe weighting. Whereas the JPX 825 is a cast club, the Pro version is grain-flow forged. And like its sibling, it too has more distance and forgiveness features in the 4 to 7-iron while the short irons are engineered more for precision and scoring. It has the same “triple-cut” sole, though, which makes both models perform well from a variety of lies. Finally, the HD version is the other end of the spectrum, with features to provide maximum forgiveness with a 4 and 5 hybrid making up the longer end of the set and deep pocket cavity irons filling out the rest. 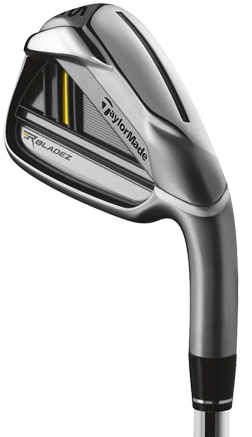 The TaylorMade RocketBladez and RocketBlades Tour and Max models provide one of the newest iron technologies for 2013. Borrowing from their other clubs and using technology previously seen in drivers and fairways woods, the RocketBladez feature the SpeedPocket, a two millimeter wide slot in the sole of the club just behind the face. That slot allows the face to flex and rebound at impact to provide more distance. The slot is filled with a polyurethane that quiets vibration, improves feel, and keeps debris out of the SpeedPocket. Like other irons, the sweet spot has been lowered to help out where most amateurs need it, on thin shots. The SpeedPocket is only in the 3 to 7-irons to maximize distance. In the shorter clubs where distance is less important than precision, there is no SpeedPocket. The Tour version of this club carries the same features in a slightly smaller clubhead that cuts through heavy lies and delivers a trajectory preferred by better players.

If new irons are in your future, you owe it to yourself to check these out. These aren’t all the irons available, and not even all the irons from these manufacturers. Whatever clubs you decide on, make sure you get properly fit – some folks will fit you for free, but even if they don’t, a little extra expense is truly worth it.