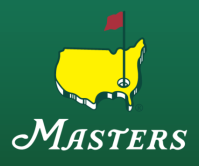 [Editor’s Note:  With the Masters approaching, we are re-publishing this article originally posted April 2015]

For me, my first trip was [last] year. I learned a lot in that trip and have a few tips I would recommend to any first-timer. But first, let me share a little about my first day at Augusta National.

When I stepped through the gates and looked out across Augusta National, I couldn’t believe just how much more it was than on TV – more verdant, more expansive, more beautiful, more perfect. As a native Kansan who grew up within an hour’s drive of the Royals’ Kauffman Stadium, I remember the first time I stepped through the concourse and couldn’t believe how big, beautiful, and special the field and the rest of the ballpark felt. This was just like that, times a hundred.

As I wandered across a fairway at one of the crossings, I looked down and the perfection was still there. Every square foot of turf was perfect with individual blades of grass all standing uniformly together. There were no bare spots, no stray clippings, and no discolored blades. I looked up to a green and it was there too – sparkling white sand in the bunkers lay perfectly uniform with perfect edges along the entire border before giving way to the green surround and, then, the green itself. I passed by a tree and at its base were pine needles, laid there in a perfect circle. 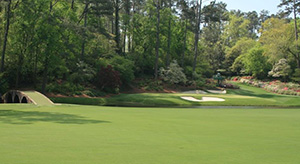 It was Wednesday, a practice day with the afternoon Par 3 Contest. The entire day, I raised my camera every moment something struck me. I bet I had my camera in front of my face about half the day, because it all struck me. The banks of azaleas, the layout of a green, a golfer making a swing, the menu board for concessions, my sandwich. I also took the time to soak it in and experience it all as it was and not through the screen on my camera (by the way, I took all the photos in this story on that day).

I made a circuitous route down to the far corner of the golf course, an area known as Amen Corner. Along the way, I watched golfers play their practice rounds, which is a different breed of golfing all in itself. They hit long clubs into par-fives and then drop a ball in layup position to hit a wedge into the same green. Then, they’ll maybe drop some balls in a bunker and hit to different spots on the green, anticipating where pin placements will be in the days ahead. 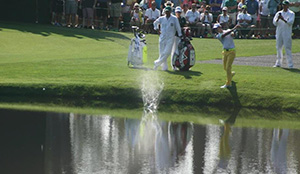 At the par-three 16th, the crowd began calling, “Skip!” when golfers had teed off and were starting to walk to the green. With a smile, they invariably stopped just short of the pond, grabbed a ball and a club and, hitting down the slope towards the water, tried to skip a ball the length of the pond and onto the green. Most didn’t make it. Those that did drew applause from the patrons encircling the hole.

I spoke to the woman managing the seating area around the green. She showed me how on that practice day the green folding chairs were loosely arranged in rows. “On tournament days,” she said, “I’ll tighten up the rows and make sure the chairs are a lot tighter. We’ll get 5500 chairs in here.” That figure seemed almost impossible, but I took her word for it. She also told me about the local rules around the chairs that were empty, saying anyone is welcome to sit in an unattended chair so long as you readily get up when the owner shows up. That information came in handy the rest of the day. 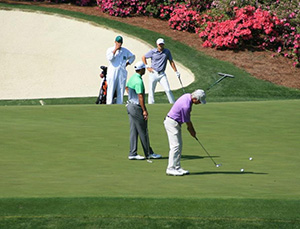 I watched Ben Crenshaw, preparing for his final Masters, give Tiger and Jordan Spieth a putting lesson on the 13th green. He placed tees in different spots (again, likely future pin locations) and then showed them the break of the putt before having them give it a go. Even on twenty-five footers, it was impressive how many times their ball hit the tee.

As I made my way from the 13th green back to the tee, I was surprised at the overall curvature of the layout. It was closer to a big, wide horseshoe more so than a dogleg. The slope of the fairway was more severe than I thought as well. I could never see myself attempting to go for it in two, even with a perfect professional’s tee shot, simply due to the uneven lie and the trouble waiting around the green itself.

Which brought me to Amen Corner – the special place where the 11th green, the par-three 12th hole, and the 13th tee box all grace the earth in surprisingly close proximity. In fact, the 13th tee sits somewhat behind the 12th green, meaning tee shots fly alongside the green and out to the fairway. 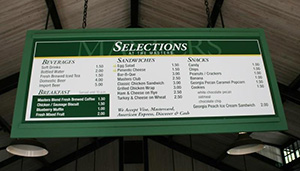 It was behind the 12th tee box that I decided to grab my lunch. Everyone talks about the pimento cheese sandwiches, but the menu is a bit broader than that. Almost equally famous are the egg salad sandwiches and Georgia peach ice cream sandwiches. Whatever the choice, they are all surprisingly economical with the pimento cheese sandwich offered for just $1.50. My selections were washed down with what the young ladies working there called their 12th hole specialty – a layered combination of pink lemonade, blue Powerade, and Sprite. Maybe they just made it up or maybe it’s been something served there for the last several years. Regardless, I decided it’s my new Masters tradition.

Leaving Amen Corner I walked up numbers 11 and 10 – or, as it felt, climbed a mountain. The 11th plays downhill and the 10th, I have heard, drops in elevation from tee to green about the same height as an 8-story office building. Along the way, I tried to find the spot where Bubba hit his playoff wedge, bending it sharply to the right and into a green jacket. Out of breath as I reached the top, I took in the cabins from where Rory once played and watched as Bill Haas teed off down in front of me.

Then I made my way to Par 3 course, picking a spot between its 8th and 9th greens to take in the action that was just about to start. If you haven’t heard of or watched the Par 3 Contest, you are missing a fun event with golf’s elite alongside a few of its legends. Most golfers bring along a small entourage, letting a friend, a wife, or their kids act as caddy. For some with very young “caddies”, it’s an interesting site as the golfer carries his own clubs while holding the hand of the youngster around the course.

We heard a roar and quickly found out that Jack Nicklaus had made a hole-in-one, then watched as players hit tee balls to number eight, putted out, then turned and hit towards us on number nine. The 8th had numerous near misses – balls that landed up near the middle of the green before slowly backing down the hill and funneling toward the hole. But, there were no aces. The 9th has a more severe slope to the green and balls backing down from the top tier to the front pin are usually moving a quicker pace. Again, several balls finished or passed within inches of the hole, but no aces. 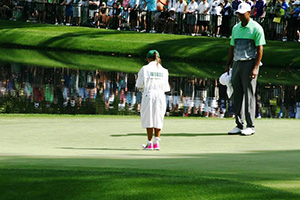 After taking in current players like Tiger, Rory, Phil, Bubba, and Jordan, as well as legends like Gary, Jack, and Ben, it was time for the golf shop. Masters merchandise is only available at Augusta National and I had a bit of a shopping list – for myself, as well as family and friends back home who put in orders or who I wanted to give a gift.

I was glad to see it was busy, but not crazy. I quickly found everything I wanted, plus a lot more, all of which accompanied me to the checkout stand. I won’t share how much I spent, but it was significant as I apparently needed a new hat, golf shirt, golf jacket, a putter cover, some glassware, three dozen logoed balls (two dozen were for a friend who asked I get them), and a pile of gifts and other smaller items. I’m not an accomplished shopper, but I looked like a pro that day.

So – about those tips for first timers:

Just a few thoughts for you and some reminders for me, because I certainly plan to go back. Now that I’ve been, I don’t want my first trip to be my last.