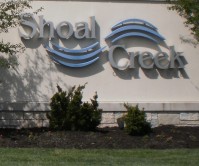 In the twelve years it has been on the Kansas City metro golf scene, Shoal Creek Golf Course has established a reputation as one of the finest public courses not only in the area but in the state. The 6,950-yard, par-71 layout was designed by Steve Wolford and rolls over and around a picturesque landscape just west of Liberty.

In July, Shoal Creek will play host to the Kansas City Amateur for a fourth-straight year (sixth overall), and it also has hosted the PGA Midwest Section championships. The course has won numerous accolades, among them is recognition as the top public course in Missouri by Golf Card Traveler and the No. 2 public course in the state by Golf Week’s America’s Best.

General Manager Brett Plymell first became a club professional when Shoal Creek opened in 2001, then came back as general manager in 2008 after three years at Adams Pointe – not that he didn’t enjoy his stint at the latter course, he said. “I’m partial to this facility,” Plymell said of Shoal Creek. “I really like it here, like the clubhouse, like the people.

The chance to start at a new course is what drew Plymell to Shoal Creek initially. “The layout was very good, and the company I worked for, it was my first head pro job.” Obviously such a highly rated course has its share of challenges, but Shoal Creek won’t frustrate the average player into taking a links hiatus. The fairways often provide plenty of landing area, but several holes have tall trees on either side that can make testy follow-ups from wayward tee shots.

“The back is a little more treed than the front, and Shoal Creek runs throughout the course,” Plymell said.

While the front nine is devoid of notable water hazards, four holes require golfers to navigate doglegs with bunkers at the bend. Two of the final three holes are par 5s. No. 7 is the longest on the course, with a wide but shallow green. No. 9 can produce some long-rolling drives with its downhill slope on the fairway, but has a sharp dogleg to be dealt with on the second shot, as well as a large tree in the right side of the fairway as you near the green.

The back nine begins much like the front, with a straightaway par 4. After a downhill par 3, water must be carried with your tee shots on No. 12 and the par 3 17th, while a pond hugs the fairway on the par 4 15th and can make the tee shot on 16 seem more intimidating than it should feel. The finishing hole is the longest par 4 on the course and can dogleg right into the wind.

“When we first opened, instead of having a signature hole, we liked to say we have a signature par 3, par 4 and par 5,” Plymell said. 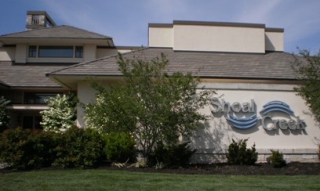 “The signature 3 is 17 – it is downhill and carries over Shoal Creek with a rock wall in front. No. 18 is a par 4 with a dogleg right, usually into the prevailing wind. The Par 5 is No. 9, with the tree in front. Lots of people will try to go for it in two, but the tree can block your shot.”

Shoal Creek is managed by Chicago-based KemperSports and owned by Kansas City Parks and Recreation. The two-tier practice tee has 25 stations, while the putting clock is 6,000-square feet – plenty of room to tune up for your round. The pro shop, with two PGA professionals on site, is part of an 11,000-square foot clubhouse that’s available for casual dining, corporate and charity events and receptions.

Throughout the summer, the club hosts a series of junior golf clinics and camps. With options for kids ranging from age 6 to 18, there is an opportunity to learn the game and have fun. The clinics run about 90 minutes each day of the session while camps are either half day or full day. Full day camps provide the added benefit of a 9-hole round after a morning of instruction.

Plymell added the club recently installed new touch screen GPS screens on the carts and tries to keep the pace of play moving by limiting groups to four players and staggering tee times. “The layout and the conditions and service we provide – we try to make it feel like a private club,” Plymell said.