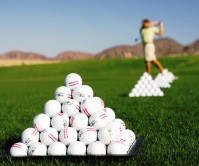 Strategy is a major part of golf, regardless of your skill level. While you are responsible for controlling the distance, direction and trajectory of the golf ball, it is also important to make the right decisions throughout your round.  Those decisions can start as early as the parking lot – perhaps swapping out a fairway wood to add another wedge option when you are playing a shorter course with challenging green complexes. When you make the right decisions, you increase the likelihood of a solid round and lower score. 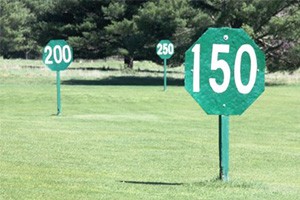 Many amateurs do not realize how far they actually hit the ball. In fact, they swing as hard as they can rather than try to learn a consistent distance for each club. Better players know exactly how far they hit each club, and how to hit each club different distances.
Pay careful attention to the difference between carry distance and overall distance. In addition, make sure you realize how far you carry the ball with each club in the event of a forced carry. There is no set distance that men or women should hit each club. Just because your friends hit an 8 iron 150 yards does not mean you should hit your 8 iron the same distance. When the shot comes up short there are several excuses such as poor contact or wind. In reality, the player does not hit the shot the intended distance. Learn how far the ball will go with a smooth, consistent and repetitive swing. Selecting the wrong club is one of the most common mistakes many amateurs make so dial in your distances on the range and don’t just grab what others are playing. 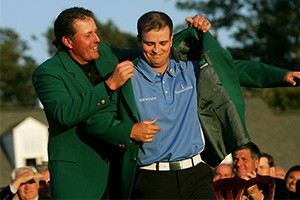 Unlike Tin Cup, you do not always have to go for it. Phil Mickelson hits some of the most amazing flop shots. Bubba is known for the miraculous shot from the trees to set up his Masters victory. However, when an elite player sets up to hit a shot, the result is not just a lucky shot. They have practiced and hit these types of shots thousands of times. When an amateur pulls off a similar shot, it is extremely lucky. When you encounter the next challenge such as a drivable par 4, reachable par 5 or even recovery shot from trees, play the percentages. Lay up, hit the green in regulation and make a stress free easy par or birdie. Master’s Champions commonly reach the par 5’s in 2 and score eagles and birdies on their way to victory. Zach Johnson broke the trend and won the Masters by laying up on every par 5 while he still birdied a high percentage of the holes. Johnson executed his plan nearly to perfection. Playing within your ability is crucial to posting lower scores. Think to yourself, if I hit this shot 10 times, how many times would I successfully pull off this shot? Then decide if it is worth it and play the high percentage shot. 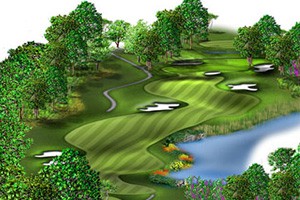 Elite players do not hit the ball as far as they can on every tee shot. Rather, they play to their strength and typically play the high percentage shot. Develop a game plan before the start of each hole. Plan the hole according to your strength. Would you prefer to hit a 100 yard shot instead of a difficult 30 yard pitch?

Pin position can dictate the difficulty of each shot. Rather than just bombing a driver to 30 yards, lay up with a 3 wood and leave a full wedge into the green. Play smart, keep the ball in play. Hit to the safe part of the green rather than go directly at every pin. If you hit a high percentage of fairways and greens in regulation you should see lower scores while avoiding big numbers such as double bogey or worse. Plan to hit shots from a comfortable distance and make your round easy and stress free.

– Matt Keller, PGA
Matt Keller is a PGA Golf Professional with over 15 years of experience. Matt is a graduate of the Penn State PGM Program. Throughout his career he has worked at courses in Pennsylvania, Maryland, Florida and Delaware. Matt has conducted thousands of golf lessons to players of all ages and ability levels. Currently, he is a PGA Professional at Cripple Creek Golf and Country Club located near Bethany Beach, DE.