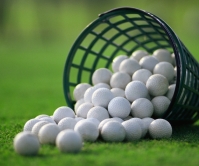 If you swing with a steep swing plane the butt end of the grip will point between your toes and the target line on the downswing. An extreme comparison is the motion of chopping wood with an axe. On the other hand, a flat swing plane will point the end of the grip toward the opposite side of the target line. An extreme motion of a flat swing is similar to the motion of swinging a baseball bat. Steep swings generally create a ball flight that start left of the target while a flat swing generally creates a ball flight that starts to the right of your target.

There are thousands of products and drills promising to transform your game into a tour caliber golf swing.  Unfortunately, many amateurs fail to see the improvement. Throughout my career I have seen many great drills and swing aids. I recommend the following drills and teaching aids that will help ingrain an efficient swing plane.

The Grip Down Drill is beneficial to learn the proper movements including the swing plane, swing path and release of the golf club. Personally, I have used the drill to ingrain the proper movements in my swing since I participated in junior golf over 20 years ago.  There are very few drills that provide instant feedback while versatile enough to practice anywhere, including the comfort of your own home. 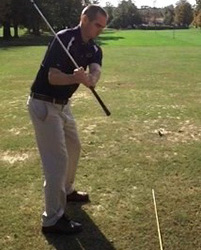 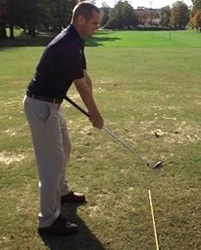 Begin by taking a normal stance.  Place a club, umbrella or alignment stick on the ground (approximately three feet from your toes) parallel to your feet so it represents the target line.  Grip the club on the shaft just below the grip. Start with club head around your knees and the end of the grip pointing towards your stomach.  Swing the club and pay attention where the end of the grip points in the backswing, downswing and forward swing. The butt end of the grip should point down toward the target line. If it points toward your toes or other side of the ball the swing plane is slightly off. 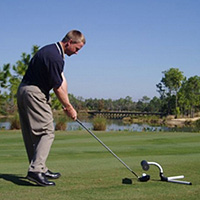 Another effective training aid is the Inside Approach. While the Inside Approach is designed to correct an “over the top” motion, it will also effectively eliminate a steep swing into the ball. It’s a simple tool that positions a small tubular cushion over the ball. Swing off plane, and your club will strike the cushion which easily breaks away to prevent any damage to your club or injury to you. Swing on plane and the club passes cleanly through the ball and leaves the suspended cushion in place. 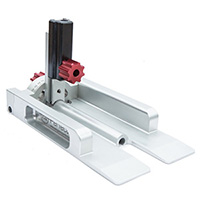 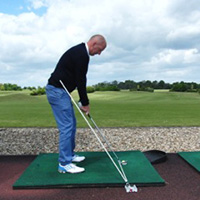