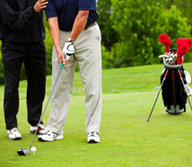 Tempo played a big role when Lexi Thompson become the youngest player ever to win an LPGA event. Her tempo allows her to hit booming drives and play her irons with a consistency not seen in any other player her age. Last year at the Kraft Nabisco Championship through the first two rounds she was second in driving distance to Michelle Wie with an average of 286 yards.

Her tempo corresponds to Tour Tempo: driver – 24/7, irons – 21/7. She’s my kind of golfer – as it was reported last year in The New York Times that she was “wearing a golf glove with the word Tempo written in her girlish scrawl. It is there to remind her not to be in such a rush, to take her time with her swing.” Well, it’s a good thing she has the glove to remind her to slow down; because now her tempo is about the same as Ben Hogan in his prime; and faster than Tiger Woods when he won the 2002 Open at Bethpage.

As I was writing this on Saturday the 17th of September, Lexi is paired with Meena Lee tomorrow in the final day of the tourney. Brandel Chamblee said that this wasn’t a “fair fight” because Lexi (whose driving average this week is around 280) is outdriving Meena by 50 yards. Tiffany Joh, her other playing partner – ‘tweets’ – “Alexis Thompson just don’t laugh at me as you walk 120 yards past my ball tomorrow, k? Thanks.”

Sunday update – Long-hitting Lexi walks away with the title, and becomes the youngest winner ever on the LPGA Tour. Sixteen years, 7 months and 8 days young.
Congrats to her on her historic win.

Wow, time flies when you’re having fun! Our new e-Book – Tour Tempo 2 – The Short Game & Beyond is now available for download. For more information, go to TourTempo.com. It applies the Tour Tempo theory to the “scoring shots” – the putts, chips and pitches from 60 yards and in that make up the majority of strokes played in a round of golf. What you’ll learn is that there is a different tempo ratio for the short game compared to the long game. And with the videos and short game tones included in the book, you’ll learn how to immediately improve your scores. In addition, TT2 serves as a master class in full-swing theory and is an insightful study into the shotmaking abilities of the game’s top players.

In September, we also penned an article on Tiger for Sports Illustrated and Golf.com available online at http://bit.ly/tiger-bad-timing. The name of the article is Bad Timing – The golfing world wants to know: What’s wrong with Tiger Woods’s swing? A simple yet revolutionary new thesis provides the answer.