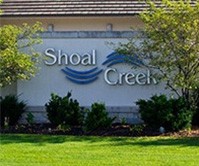 There’s a good reason everyone raves about Shoal Creek.

The beautifully-designed Northland course has been ranked by Golfweek in the top five in Missouri each year since 2006 and ranks among the top 25 courses in the U.S. as rated by layout on GolfAdvisor.com. On top of that, it’s always been one of our favorites here at KC Golfer and KCmetroGolf.com, too.

Besides the great layout and wonderful design, Shoal Creek is a local favorite also because of their superior service.

“I always tell my staff, when people are here it’s their vacation day,” said Brett Plymell, PGA General Manager, who began as the Head Professional at Shoal Creek in 2001 and later returned as General Manager in 2009.  “Even if it’s just four hours with us, treat them like they’re on vacation.  They’re trying to get away and get some recreation.”

“Besides the course accolades, we’ve also been ranked in the top five in the country based upon our customer satisfaction by the National Golf Foundation, which is pretty impressive for us,” Plymell said. “It kind of shows our dedication to customer service.” 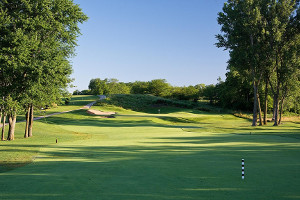 The par 71 zoysia course with bent grass greens was designed by Steve Wolfard and opened in August, 2001. It plays 6,950 yards from the back tees and features challenging elevation changes in an idyllic setting designed to enhance a feeling of relaxation.

“The layout is really good,” said Plymell, who likened Shoal Creek to an Ozark-style course. “The way they used the land is really good. It’s unique; each hole is more individual. You don’t see everybody on the other holes.”

Development in the area continues to increase. “There’s nowhere in the city that’s developing as fast as the Northland,” he said. “There are more developments going in on the east and south sides of the course, but even when the house are in, they won’t be up and down each hole like you’d see on some other courses.

With a course rating of 73.9 and slope rating of 136, there’s plenty to challenge good golfers and plenty for average golfers to enjoy. The front nine features wide landing areas on wooded holes, with the longest hole on the course, the straightaway par five Number 7 playing 579 yards from the gold tees. The first nine finishes with the par five Number 9 measuring out at 536 yards with a sharp dogleg right. 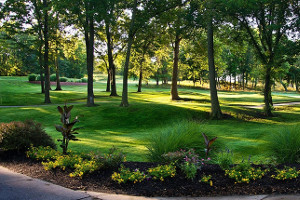 “We kind of think that we’ve got three signature holes here,” Plymell explained. “A signature par 3, par 4, and par 5. Number nine’s kind of our signature par 5. It’s reachable in two, but there’s a big tree in front of the green that blocks any shots coming in.”

All of the water is on the back nine, which features fewer trees but somewhat tighter fairways, and is where Shoal Creek’s one-two punch puts a finishing touch on an enjoyable round.
“Number 17’s our signature par 3; it’s downhill over Shoal Creek, pretty much all carry,” he said. “A pretty, scenic hole.”

Number 18 follows as the course’s signature par 4. “It’s 460 from the back tees and usually plays into the wind,” Plymell said. “17 and 18 put together, I think, are two of the best finishing holes in the city.”

A fairly long carry over water on 18 with a slight dogleg right makes for a challenging finishing hole. “It can be tough, especially when the wind’s blowing,” he said. “The south wind makes it a pretty long hole for sure. It’s a tough finish, but it’s a good one.” 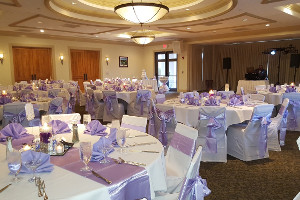 Owned by the city of Kansas City and managed by KemperSports, and offers a variety of other amenities, in addition to the terrific golf. Those amenities include a well-designed, modern clubhouse which can house banquets, parties and wedding receptions of up to 250 guests. The spaces inside the clubhouse include the ballroom as well as the Fireplace Lounge – a more intimate setting for groups up to thirty. Add in the Players Grill, seating 50 and with a full bar, as well as the Pro Shop, and Shoal Creek has everything you would expect of a top-tier clubhouse experience.

“We do a lot of weddings, banquets, and parties,” Plymell said. “Pretty much every Saturday this year is booked with a wedding or reception or other food and beverage event.”

The two-tier, 12,000-square foot practice area features 25 hitting stations and six target greens.
Shoal Creek has been a past site for the Kansas City Amateur tournament and will be hosting the U.S. Amateur qualifier this year. “We have a lot of corporate charity outings during the year,” Plymell said, estimating that 7,000 of their 30,000-to-32,000 annual rounds are in those events. 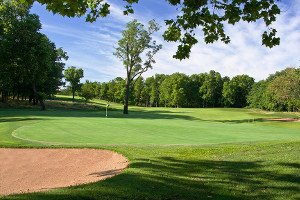 Staff are equipped to handle tournament events with up to 160 players. One of the most important tournaments will take place July 30 with a memorial tournament honoring Colonel Rod Yeager, a retired Air Force Colonel and PGA Professional who passed away in February. Shoal Creek hopes to raise $30,000 for PGA HOPE (Helping Our Patriots Everywhere); they are asking for sponsors and silent auction items, and have hole sponsorships available.

In addition to the popular St. Paddy’s Day and Halloween tournaments, there are daily leagues. “We do offer memberships as well, so we’ve got daily play and membership play pretty much every day,” Plymell said.

Annual passes range from $215 to $439 per month, and daily play is affordably priced from $30 (twilight rate) to $69 for prime-time weekend play. 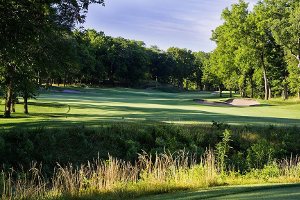 Shoal Creek is working to attract golfers of all kinds. “We do a lot of junior programming,” Plymell explained. “Our parent company (KemperSports) is going to have a player development month in June, so we have a lot of promotions going on, a couple of free clinics that we do.”

Begun in 2006 in Northern California, “Youth on Course” encourages youth participation in golf by allowing them to play for $5. “To be able to play here for only five dollars, that’s a pretty good deal,” Plymell said. “We get a lot of really good junior players here, a lot of high school kids.” 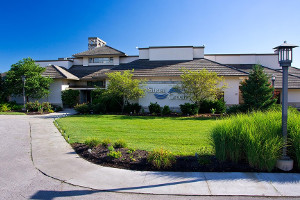 Shoal Creek is also the home course for Liberty High School. “We try to encourage kids to come out here as much as we can,” he said. “We don’t want to be exclusionary. I like having them around. We try to start them around here at five or six. I see two- and three-year olds out here hitting balls around all the time. It’s a fun environment. We try to make it kind of a relaxed, non-stuffy environment.”

A wide variety of programs and excellent customer service are a winning combination. “We pride ourselves on treating our customers like a country club,” Plymell said. “We try to emphasize the customer service aspect.”
And with some of the best golf in the region, Shoal Creek is a truly inviting place to play.
“The course is good,” Plymell said. “It’s getting better and better. We’re pretty happy with what’s going on right now.”
For more information about Shoal Creek, call 816-407-7242, or visit their website: shoalcreekgolf.com