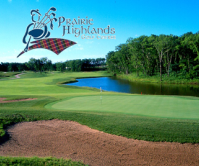 Regularly recognized over the years as one of Kansas’ best, Prairie Highlands is hoping to return to its place among top-tier courses. To accomplish that, General Manager Shawn McGuire was recently brought over from Hillcrest to help spruce up a course which consistently ranks among the top five Kansas courses.

“Our main focus has been getting Prairie Highlands back to the prominence of when it opened,” he said. “I remember when I first came to Kansas City, this was one of the places to play. It was a brand-new golf course; it was in pristine condition.”

Restoring some of the brand new feel is one of McGuire’s primary tasks.
“That’s our goal,” he said. “We’re trying to get back to people thinking that about Prairie Highlands, but we want people, when they come out here, to have a good time.” 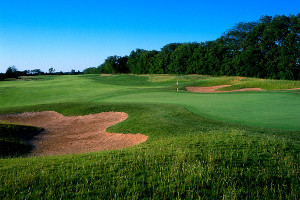 A complete course makeover was not needed, though. The basic structure was still sound.

“I felt like the bones were there,” McGuire said. “It needed the fine touches. Really, there’s nothing wrong with the layout. There’s nothing wrong with the fairway, or the rough, or the tee boxes. The bones are there. Our goal is to make sure of the small details, the little things that add up.”
He and new superintendent Jeff Clark set to work with a detailed plan to upgrade the course.

“Part of what we focused on, initially, was the greens,” McGuire said. “My stance has been if you get the greens slick and fast, people talk. Part of what we did was invested in two new greens rollers and two new greens mowers. We needed some upgrades to make sure that we could have some consistent green speed and to do some things that really made our patrons happy and anybody else that decided to play here. It really was just a concerted effort to say, hey, we want our greens to be a little firmer, a little fast, and consistent.”

The new greens rollers lack hydraulic fluid, which eliminates the risk of damage to greens from leaks. This kind of attention to detail shows, too, in their approach to watering the greens.

“We focused on watering a little bit less,” McGuire explained. “Making sure that we dry them out a little bit; they’re a little firmer, a little faster. I’d seen and heard in the past where maybe a little bit of overwatering had happened. When I first came on I really noticed. It really didn’t hold ball marks very well. It tore up the greens because they were so soft.”

“At times, when you dry them out and on days like this when it’s hot, we’ve got two or three guys out at all times hand-watering,” he said. “They work hard and do a really good job keeping them that way. It’s a tough challenge, but it’s one that we’re willing to meet. We’ve really tackled our greens this year. That was our goal that we focused on this year: green speed, green consistency.” 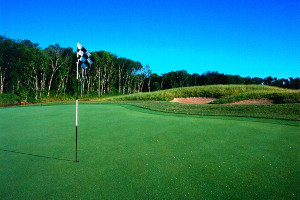 Another challenge McGuire and his staff are currently tackling is to upgrade the bunkers.
“What we’ll continue to do to add to (our) product is upgrading the majority of our bunkers,” he said. “That’s our next goal. It’s a slower process, a long-term process, especially when you’ve got 58 of them.”

In addition to fine-tuning the course itself, they have upgraded their customer service.
“Not only did we change our staff here a lot at Prairie Highlands with our maintenance crew,” McGuire said, “but here at the pro shop we really freshened up what I would consider the soul and kind of aura when you come in and who you deal with and how they are.”

They also added a new fleet of carts featuring a new GPS system.
“It gives you full-on distances to bunkers, which our people that play here are accustomed to having,” he said. “We had an older system a couple of years back. We brought this one on and it’s done really, really well for us. It’s a little sleeker design. It’s just an added perk.”

To make it easier to use for both customers and staff, Prairie Highlands has introduced a more comprehensive pricing system. Instead of having separate pricing for golf, for a cart, for a range pass, etc., the course offers it all in a set of membership packages ranging from $89.99/month to $149.99/month.
“We’ve tried to combine some of those things to make one price so that we’re not necessarily nickel-and-diming people,” McGuire explained. “It’s more of an all-inclusive approach. There’s some difficulties in that, but I also think it kind of changed the attitude of what we are providing for our customers, so, for me, it’s just kind of added value and seems to be a positive sentiment.”

The par 72, links-style course with zoysia fairways and bent grass greens remains a terrific golf destination. At 7,100 yards from the back tees and with four sets of tee boxes, it accommodates every kind of player. There are several interesting holes and McGuire has his own favorites.
“I really, really like number nine,” he said of the 570-yard, par five. “It’s a full risk/reward. I think it’s easier playing it when you hit a good drive and you’re in an area where you can go for the green in two, but normally you’ve got to carry a lot of water and there’s some bunkers up there as well. So, it brings not only the intelligent target golfer into play but also the guy that wants to grip it and rip it.” 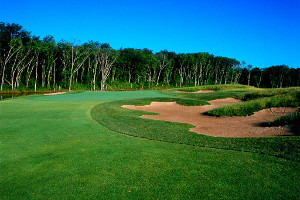 Number 15, another par five, at 537 yards, is similar to number 9, but with water on the other side.
“Ultimately, I’m a kind of par-five guy,” McGuire said. “Number 15 requires a decent tee shot then it’s a little bit different because the water’s on the left, not like number nine where the water’s on the right. You can go for it, but there’s bunkers all up along the right. Both are huge risk/rewards if you want to get on in two, and if not you’ve got to really kind of be smart about your layup shot. Both of those holes would be my favorites.”

Number 6, a 377-yard par four, is also on his list of favorites.
“You can hit an iron off the tee box and still have a short iron into the green,” McGuire said. “You’re hitting over a smaller, kind of an elongated green, to a wide green with a lot of pitch in it. I really think it’s a lot of fun.”

The spacious layout gives players a lot of options.
“Because of the space we have, we can kind of move the tee boxes,” he said. “They can play as easy or as hard as you want. But they also have a decent amount of slope in them that make them challenging. If you’re playing the right tee boxes, I see this course being a lot of fun for all ages and all types of people because you’re going to be in the same general vicinity and you’re going to have the same problem: do I go for it or do I lay back.”

Overall, McGuire hopes Prairie Highlands customers will enjoy their visit and want to make it a regular stop.
“When I came in, what I thought we really need to focus on was making sure that not only do [golfers] have a good time, but they feel they’ve gotten good value,” he said. “They leave here thinking, ‘man, I’d love to play here again’. Not just because of the golf course, but because of the way people treated them.”