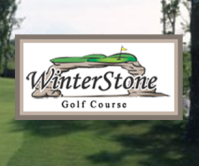 Winterstone’s unusual style of golf begins with its unique origin.

The facility located off 291 Highway in Independence opened in 2003 as the only American golf course which sits atop an active mine, and they invite customers to “Feel the Thunder.”

“Maybe the most unique thing about Winterstone is its creation,” said Head Golf Professional Kane Chapman. “When they opened they believed it was the only golf course with an active mine beneath it as part of the same project and property. That’s kind of an interesting start to the course.”

Mining is no longer active directly beneath the course, but there’s still active mining across the street.

“Our owner, Harlan Limpus, his background is in rock,” Chapman explained. “His big push behind the golf course was that he wanted to make double use of his property by putting the golf course on top of the mine. You’re not going to build a housing development on top of an active mine, so this is what he chose: a really good golf course.”

While players won’t actually feel the mining activity, they might hear it occasionally.

“It sounds a little bit like thunder,” Chapman said. “Once upon a time we called our twilight period our ‘thunder time’ because we started about the same time generally when they were mining.”
Winterstone especially appeals to golfers who enjoy an Ozarks-like experience.

“A tagline we use is ‘A Touch of the Ozarks’,” Chapman said. “It reminds everyone of an Ozark style, with lots of elevation changes and wooded areas. People say that the kind of course it is, it should be in the Ozarks; it reminds them of that. It’s really a unique piece of property around Kansas City.”

Elevation changes feature prominently in the course’s signature par 5s, a pair of each on the front and back nine, which Chapman describes as his “personal favorites.” 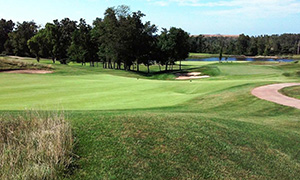 “I love all four of our par 5s,” he said. “They do embody that Ozarks thing. There’s two similar (holes) on each side. #4 and #11, they’re both going from north to south, up the incline. #11 has a creek that winds in front and it runs along the side, whereas #4, it goes along the left side, and then it goes underneath the fairway to the right and then goes along side.”

While they are shorter in actual yardage, they play longer because of the elevation change. The south end of the course is higher elevation; #4 and #11 climb as they go from north to south, and both feature tiered greens.

“You’re climbing up the entire way, whereas when you’re going the other direction we have holes #9 and #16 and they’re the opposite,” said Chapman. “They both measure longer, but play shorter. If you go long on #9, you’re in big trouble. It does play downhill, especially off the tee. #16 will play downhill the entire way.”

#9 is guarded by a number of hazards which leave little room for errant shots.

“Nine has a lot of bunkers and water on the left that comes into play both off the tee and along the length of the hole and on the side of the landing areas,” Chapman explained. “You’re hoping you don’t have to bail out right to stay out of the water.”

Staying true with club length is especially important on #9, while on #16 it’s critical to stay centered with your approach. 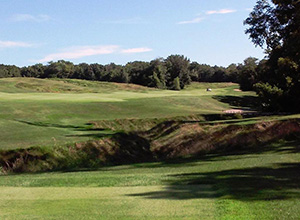 “There’s a low area down below (the green) on the left and mounding on the right,” he said. “If you hit it way right you’ll have a blind shot to the green. Way left and you’ll be hitting it up a hill and maybe trying to dodge between trees to get it up on the green. It becomes a little bit of a challenge if you miss wildly there. Honestly, if you’re not confident in your shot, instead of going for it in two, you’re better off on both just laying up and using a shorter club to put it on the green.”

“The back area (on #9) is higher elevation,” Chapman said. “There’s a little risk/reward there.”

It’s a prevalent theme throughout the course.

“That’s the thing with this entire course,” Chapman said. “There’s a lot of risk/reward spots. If you play the smart shot all the way around, it’s going to play pretty easily. If you play to the wide side, to the fat part of the fairway and the green, you’re going to be fine. If you start trying to play the more aggressive shot, you don’t have very much room for error.”

Although it’s a relatively short course at just under 6800 yards from the back tees, elevation adds to its length.

“It plays longer than it measures, because of the elevation,” he said. “But it’s not a super long golf course, so you don’t necessarily need to be as aggressive. A lot of people think ‘let’s hit a driver on this hole and put it up around the green’. You’re welcome to do that, but generally if you do, there’s some areas that if you’re not extremely precise, it can get you in a lot of trouble.”

Some of the par fours are invitingly close. 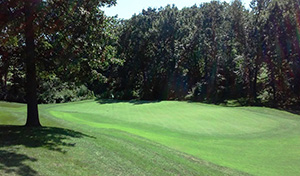 “There’s a couple of par fours that for the longer hitter are reachable off the tee,” Chapman said. “#17 is an example. It has a creek that runs along that essentially acts as a moat for that green. If you’re a little short, you’re in deep trouble and there are trees that kind of protect it on the right as well. There’s a lot of risk/reward. If you want to play the more conservative shot and hit a shorter club into the green you’re fine. If you miss your tee shot with an aggressive shot, (it can) ruin a good round, too.”

Winterstone offers memberships in different ways. First, annual passes range from twilight-only play to those which are good seven days a week. Senior and junior passes are available, too, and all annual passes are good for a year from the date of purchase; a membership bought in August won’t expire in December.

“We kind of have everything covered,” Chapman said. “There’s one in each area. It’s a monthly fee of $34.99/month and then each time you play it’s $20. It’s has been really popular, and why wouldn’t it be? It’s a great deal. With those golf courses, playing one time on a weekend in a month, you break even.”

Club memberships permit a player quality golf at any of the six member clubs while enjoying a variety of experiences.

“You get choices,” he said. “If we’re busy here or have an event scheduled, you can go to Dub’s or Eagles’ or Heritage, or wherever you want. You have lots of options and they’re all quality options. That program is beneficial to both the player and the golf course.”

Members can use their membership however they want.

“We have members who are very active in that program who don’t ever play here,” Chapman said. “They play out at Dub’s or Alvamar all the time. Then we have players who live near here or maybe in Liberty and they’re going to play here all the time. But you don’t have to play only here. That’s the beauty of the program.”

Chapman emphasizes that the quality of play is on a level with some of the best clubs around town.

“I would put the conditions of this course up against any facility in Kansas City, public or private,” he said. “Our superintendent, Daryl Pearson, is phenomenal, and this golf course shows that. He’s very skilled at his craft. He’s really good. There are a lot of really good superintendents everywhere, but he does just a phenomenal job.”

Although Winterstone has several corporate-based leagues, they run only one: a Tuesday evening two-man best-ball group. The course is also popular for charity and corporate tournaments, and they run their own set of tourneys, the Majors Series, which takes place the Sunday of each PGA Major tournament. Players pick a pro and pair their score with the score of the pro in the major. The final event took place Sunday, August 16, paired with the PGA Championship at Whistling Straits in Kohler, Wisconsin. By popular demand, the Majors Series will return next year.

“Everybody seems to like it,” Chapman said. “You can shoot your round and then hang out with everybody here and watch the golf.”

When you hang out to watch golf, you can do it at one of the most unique off-course venues in the area: the Winterstone Pavilion.

A terrific event space for tournaments, parties and receptions, the Pavilion is fitted with accordion glass panes which allow it to be an open-air facility or fully-enclosed with a wonderful view of the course. 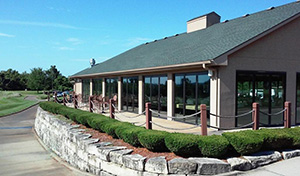 “About 70 percent of the building can be open if you want it that way, or we can close it down and heat it or cool it,” Chapman said. “It’s as good a tournament spot as there is in town, just because of the way it sits. It’s got a great view of the golf course, because it’s either open air or glass enclosed. You can see a great view of #18 or #3 on the west side of the building. Sitting there watching everybody come down #18, you’ve got a great spot to do it.”

The location has played host to a number of events.

“Parties, receptions…we’ve done a few weddings in there,” he said. “It’s a good facility, because of its uniqueness, because of the ability for it to be open air or fully enclosed.”

Mostly, though, Winterstone is simply about good golf.

“It’s core golf,” Chapman explained. “There’s no housing development attached to it. There’s no other reason for us to be here. It’s just core golf. We do a little bit on the parties, but we don’t do very much, because it’s core golf. We have times where we’ve got a golf event, and that’s going to take precedent over a non-golf event. We don’t have a big fancy kitchen. It really is just the basics, with a really, really good golf course.

“It really is just about the golf here. Really good golf. The golf course is good and the conditions are really good.”

For more information about Winterstone, visit their website: winterstonegolf.com.