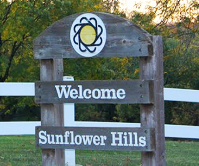 If your out-of-town friends think that because you live in Kansas that your home course is parking-lot flat, take them to Sunflower Hills Golf Course in Bonner Springs. They’ll leave with an entirely different opinion.

Sunflower Hills borders I-70 on the north between I-435 and K-7 in Bonner Springs, but unless you hear the traffic going by on the highway, you could be anywhere with hills and valleys. It’s one of the most challenging and affordable courses in the Kansas City area. 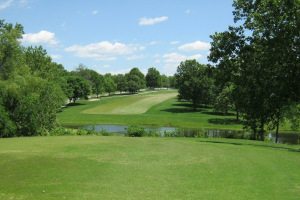 Opened in May 1977, Sunflower Hills is an 18-hole championship golf course designed by renowned architect Roger Packard, who used the existing topography to create the hilliness of the course that seems out of place to the outsider who thinks of Dorothy and the flatlands of western Kansas.

“(Packard) moved hardly any dirt to form the fairways,” said Jeff Johnson, the club pro at Sunflower Hills since 1981, which makes him the most tenured club pro in the metro. “It’s a natural layout. We’ll get comments from people playing it for the first time saying it’s hillier than they expected.”

Measuring over 7,000 yards from the back tees, Sunflower Hills has five sets of tees, large rolling greens, zoysia fairways, and numerous bunkers and water hazards.

Like a lot of courses in the Kansas City area—and around the country for that matter—the pandemic slowed things down for Sunflower Hills. But the drop off has hardly been noticeable at all, certainly not as drastic as it could have been. Johnson gives credit to a loyal base of customers. 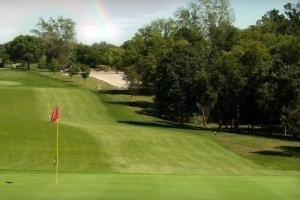 Sunflower Hills closed for just three days to regroup and figure out how to abide by the guidelines and still provide an opportunity for people to get exercise and enjoy the beautiful course.

At first golfers were only allowed to walk the course, which was difficult for some because of the hilliness of layout. When carts were allowed in late April, each golfer had to have his or her own cart, which limited the number of golfers to the number of available carts.

It wasn’t until June that two golfers could share a cart.

“We were concerned at the beginning of the pandemic that it would cause play to really drop off, but I was pleasantly surprised with the number of people who were willing to walk the golf course,” Johnson said. “When we got carts back, we couldn’t tell a difference from past years because we were so busy. 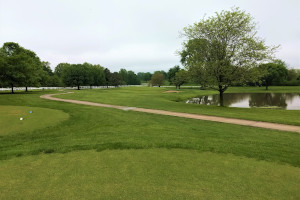 “One of the safest places to be is on the golf course because you’re outside in the fresh air, usually separated by several feet from other players.”

A big part of the loyal base is the over-55 crowd. While that’s not unusual with golf courses, because the ability to play instead of work fits that age-group well, Sunflower Hills has a particularly strong senior group.

A Wednesday league garnered 150 entries, with a range of 115 to 130 golfers most weeks. There’s a second league on Mondays with smaller numbers.

Many of those golfers know each other by name, because they play more than just on Mondays and/or Wednesdays. I played on a Thursday with a group of men 10 or more years my senior, and they all schooled me. As we were putting out on our 10th hole, another group was finishing their 14th. One of the men in that group hollered over that he was 2-over after 14 holes. 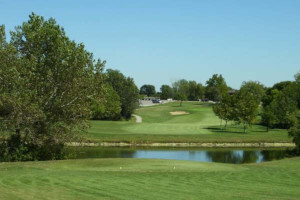 That’s pretty good on a hot humid July day, especially when you consider that he’s 94 years old. One of my playing partners said that guy had shot his age more times than he could count. I could only reply that I really feel good when I shoot his age.

Johnson has seen a lot of changes in his 39 years, but he’s not going to rest on his—or the course’s—laurels. There are plenty of people from well beyond Kansas City who depend on that.

“I’ve seen a lot of highs and a few lows, but the course has matured very well over the years,” Johnson said. “The thing that makes Sunflower Hills challenging is that very rarely do you have a level lie. The comments we get from visitors are that it’s a very nice golf course, especially for our very reasonable rates. And we get a lot of visitors.

“We have regulars from as far away as Pennsylvania.”

And until the out-of-towners play it, they probably think it’s going to be flat.