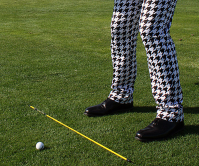 Poor aim and alignment is easily one of the most common mistakes in the set up. Watch any elite player and notice how they pay attention to little details such as the direction they are aimed. Rarely do you see a PGA or LPGA player line their body to the right or left of their target, unless they are trying to shape the shot. If you watch them practice, they routinely place a club, umbrella or stick parallel to their target line. This reinforces little details such as the correct alignment. Over ninety percent of the golfing population routinely slices the golf ball. Yet many aim their body to the right of the target. This forces them to hit the shot to the right of their target or manipulate the swing path so they hit the ball toward the target. 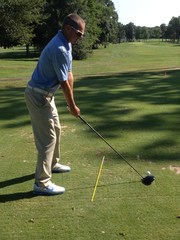 Aim is known as the direction you are attempting to hit the golf ball. A golfer will aim at their target. Therefore, if a player is attempting to hit the ball straight the club face is square to the target line. Note the golfer pictured on the left has placed a stick on the ground to help reinforce proper alignment. A club will work just as well. 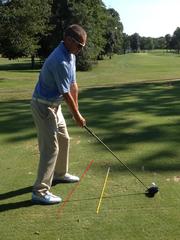 Altering alignment is an easy way to promote a draw, hook, fade or slice. Produce a draw by aiming the clubface down the target line. Position the feet, knees, hips and shoulders to point slightly to the right of the target line. This is called a closed stance and can be seen at right. From this set up position, make a normal swing. The clubface will be slightly closed at impact causing the ball to curve from right to left. If the club face is significantly closed at impact the result will be a hook. A hook turns much more severe with a right to left ball flight.

A fade is produced by setting up opposite of a draw. Aim the club face down the target line. However, the feet, knees, hips and shoulders will be lined up slightly to the left of the target line. This is called an open stance and can be seen below. You will make your normal swing and impact should result with a slightly open clubface. The ball should start left and curve back to the right. A slice will have a much more severe left to right ball flight. 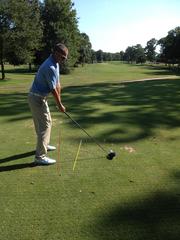 Observe any elite player and notice their pre-shot routine. Typically they pick their target and proceed to line up from behind the ball. Your vision can also alter your set up and alignment. Everyone is either left eye or right eye dominant. If you line up from the side of the golf ball, it is easy to line up incorrectly right or left of the target. Therefore, in your pre-shot routine, it is extremely important to pick a target and line up from behind the golf ball. Approaching from behind improves your vision and success rate of lining up correctly.

Matt Keller is a PGA Golf Professional with over 15 years of experience. Matt is a graduate of the Penn State PGM Program. Throughout his career he has worked at courses in Pennsylvania, Maryland, Florida and Delaware. Matt has conducted thousands of golf lessons to players of all ages and ability levels. Currently, he is a PGA Professional at Cripple Creek Golf and Country Club located near Bethany Beach, DE.