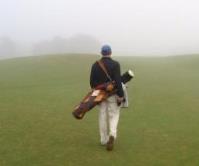 One evolution in golf course design is that new courses are usually not friendly to walkers. They are often built in subdivisions or in rugged terrain, necessitating holes to be spread out and with long distances from greens to tees. It’s also a good source of revenue for courses to rent carts.  But, alas, Kansas City still has a lot of courses you can walk, some much less strenuous than others. We have played and walked all but one of the courses below. Based on that experience and chats with some of the pro shops, here is our rundown on walkable courses.

This has always been one of my favorite courses in Kansas City. The holes border woods or tall-grass meadows and two holes on the back have great views of the lake, especially since recent course renovation.. This is also a very walker-friendly course, with only a couple of long uphill treks on the front nine.   Tees are handy from the preceding greens. The course has all new greens, all the more reason to tee it up here. 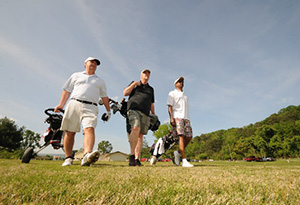 Until the recent replacement of six holes, St. Andrews was a breeze to walk. It’s more of a challenge now as all six new holes are nothing like their flat, plain predecessors. The new holes – 1 through 3 and 13, 14 and 15 _  feature several steep up and down walks. But catch your breath on the other 12 holes and enjoy walking this popular and much improved course. One thing to note, though, is that the tougher new holes have probably added 15 minutes to the average round at St. Andrews, especially for walking groups.

There are few easier courses to walk than Overland Park, one of the busiest venues in the metro area because of its low rates and convenient location in south Johnson County. The South nine is the least-trying walk. The last four holes on the North course are a challenge to the stamina, especially the long, uphill par 5. But overall, these two nines should be walked.  You have to take a cart to the distant West Links, but you can ride nine there and still walk the South or North, which didn’t used to be the case if you played West first.

This course in Blue Springs is for serious walkers, and serious golfers. Adam’s Point has a great variety of imaginative holes that definitely favor local knowledge. There are numerous target landing areas out of view from where shots are taken. Those on a cart have the advantage of driving ahead for a look. Walkers will encounter some long, hilly holes and a few hikes from tee to green, but there are tougher waking courses in Kansas City.  Adam’s Point has such an interesting layout and walking is a better way to truly absorb the course’s nuances.

This course turned 100 years old in recent years, making it one of the area’s oldest and most historic. The first two holes are pretty flat but then comes the ascent to number 3, which would poop anyone out. Golfers may recall when there was a cable carriage to transport players to that tee. Now, a ranger gives golfers a lift. Same story to get to uphill to 13 tee. Once in the high country, where most of the course is located, the holes are fairly walkable. But be ready for a challenging and sometimes unnerving round as even some shots landing in the fairway will drop into the abyss on this venerable Johnson County-operated layout. Pick your line and hope you hit it. 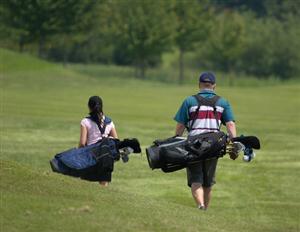 This south Johnson County-owned course would be pretty kind on walkers if not for a few very long paths from green to tee, such as from the first to the second holes. On those minor treks, it’s best to take in the scenery and focus on the next hole. If you are playing with someone alone on a cart, you can probably hitch a ride to certain tees. The holes themselves are without many severe hills. As an aside, some have shared that Heritage gave away a lot of its natural beauty by cutting down the tall prairie grasses between many of the fairways. It does speed up play and make more balls easier to find, so there are some perks to change in the course’s set up.

If you have an affinity to water – as in view, not as in where your ball might land –  it’s hard to beat these two courses overlooking Smithville Lake. Golfers will absolutely love some of the holes along the water, such  4, 5 and to 6 at Posse. Very picturesque. Somehow, settings like this can be better appreciated on foot. That is not to say that either of these courses is a walk in the park.  There is some rolling terrain, but walks from greens to tees are not difficult and there are shortcuts for walkers in some places.   Paradise Point, perhaps because of its perceived distant location up north, is usually pretty easy to get on and has relatively low fees. It’s the next best thing to getting out of town for a round and very much worth it, walking or riding.

One downside to walking is that you can be worn out by some shots. Take the first hole at Swope. If you hit it down the right side, the ball will end up in a large basin, which means walking way down and way back up. Keep it on the left, the hole walks easily. It’s this way a lot on Swope, which is no doubt a test for walkers overall. It certainly provides incentives for walkers to hit the right spots so they can limit their fatigue. But this A.W. Tillinghast design is one the area’s most historic and challenging courses. If you must, walk one nine and ride the other, but give Swope a try if you haven’t already. And by all means, hit it straight.

This is one of the easiest 18-hole walking course in Kansas City. I’d almost be embarrassed riding this flat par 70 course that plays less than 6,000 yards from the back tees. The slope is just 107. But this course  is great to have around. Not everybody wants to play tough, hilly courses. There should be courses for all levels of players, including beginners or those who want to combine exercise with the fun of the game. Minor Park is that kind of course. 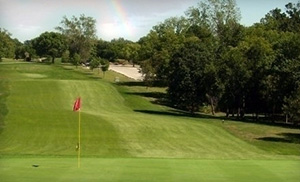 This is one of those badge of honor walking courses. “You’re going to walk Sunflower?” people might ask. The course plays 7,000 yards and sports a 132 slope rating. It’s not so much the occasional hilly fairway as it is the strenuous hikes to tees on 7, 11 and 12 that challenge walkers. If you have the honors, just let other players tee off first to catch your breath. Sunflower is demanding course and not especially hard to get on. It will keep your attention and bring you back, maybe in better shape for having walked it.

Bravo for newer courses made for walkers. Opened seven years ago when so many new courses favored cart golf in winding subdivisions, Drumm is a long but walkable venue. The most arduous part is walking from 13 green to 14 tee and the course is not exactly flat. But in the Kansas City area, it is hard to top this combination of a great golf course that is also friendly to those on foot. It’s also got a rural feel, surrounded mostly by countryside. The course has a variety of interesting holes and will not lull anyone to sleep. 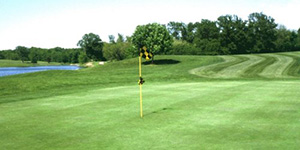 This course is on the same order as Minor Park, described below. Both are owned by the city of Kansas City and geared toward beginning players. Hodge is about as easy as Minor to walk. Actually, the pro shop will tell you that the toughest walk at Hodge is between the clubhouse and parking lot. Hodge plays just 5,707 yards from the white tees, which most people play . Even the back tees are just 6,108 yards. It’s good to have courses such as Hodge up north and Minor Park down south for leisure golfers who like to walk.

This course, once famous for exceeding 8,000 yards from the back tees, has actually been set up for mere mortals for many years now. It plays 7,200 from the back tees, and 6,600 and 6,200 from the other two mens’ sets. And, of course, terrain rather than length determines a course’s walkability and Dub’s is fairly level with only a couple uphill hikes. Distances from green to tee are mostly reasonable, too. This is still a course that favors long hitters but it’s a not a punishing walking course and remains a fun challenge in the countryside.

The front nine is fairly open and level and is quite a bit easier to walk than the back. The second nine s rolling and wooded with the holes more spread out than on the front. Holes are close together, making distances from green to the next tee consistently walkable. This course is not long at 6,300 from the back tees, but it is tight in spots and requires some accuracy. In recent years the course has removed a few bunkers and added zoisia grass.

Formerly Victory Hills Country Club, the course turned 80 years old this year. It’s advertised as a course where “four hours would be the norm” as it is short, at 5,800 yards from the back. Holes are close together and convenient to walkers, but it’s a tight course. Painted Hills gets a lot of senior play and relatively few people walk it, but it’s certainly one where you can grab the bag and get around easily on foot.