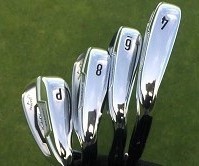 Now that the 2017 golf season is upon us, the time has come to kick your game into high-gear. Before doing so, consider revisiting a few fundamentals to give yourself the best chance of success on the course this year. A typical golf bag is comprised of somewhere around 75% irons. On any given hole, the average golfer is nearly guaranteed to hit at least one iron shot.
The caliber of irons you put in your bag are, therefore, worth considering. Your ball-striking ability is a crucial component to your overall craft as a golfer, and like any craftsman knows, you are nothing without your tools. The article below outlines six new iron sets introduced this year in what many call the “Players” category – meaning single-digit handicaps would be the typical target audience for this lineup. Learn why the best of the best put their trust in these irons and why you should too. 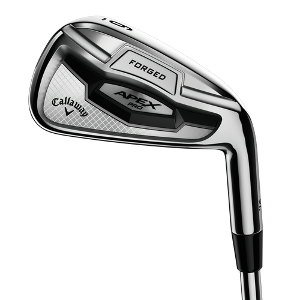 Callaway Apex Pro
Whether you’re a scratch golfer or a 20+ handicapper, your irons should provide an aesthetic that’s pleasing to the eye. Callaway built their Apex Pro irons with an artist’s touch, ensuring eye-catching appeal for golfers of all skill levels. More importantly, Callaway addressed the playability of their new irons by focusing on three specific components: feel, precision, and customization.
The Apex Pros are made from 1025 mild carbon steel and advanced quadruple net forging, which creates the soft feel off the face that players prefer.
The multi-material design optimizes each club’s center of gravity (CG). The longer irons (3-5) are more offset, with a tungsten insert that lowers CG for higher launch. The shorter irons (6-wedges) have a higher CG for a controlled, penetrating trajectory, further optimizing their playability.
For added customization, these irons are offered with a wide selection of steel shaft options at no upcharge. Speak with your local pro to decide on a shaft best suited for your style of play. 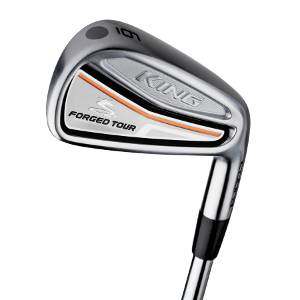 Cobra King Forged Tour
The Cobra King Forged Tour Irons offer superior feel, accuracy, and consistency for the better player. Cobra also focused their attention on club-face center of gravity to ensure consistent shot-making. Strategically placed tungsten inserts in the heel and toe position put the center of gravity directly behind the impact zone on the club face for consistent distance and trajectory control. Consistency is key when it comes to improving your game.
Cobra also understands that feel, like club aesthetics, is a lesser known component that most players deem important. A Thermoplastic Polyurethane insert located behind the hitting zone on the club head medallion damps vibrations and improves feel like a muscle-back iron.
Consistent shot-making is half the battle. Getting your ball to stop on a dime, or release into an uphill hole-location is also crucial. CNC milling on the club face improves groove & face structures to deliver maximum spin control. 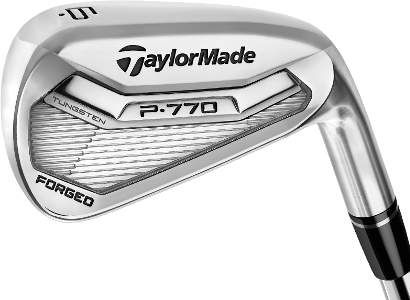 TaylorMade P770
The critique on TaylorMade irons in recent years has been the lack of Tour-caliber technology being introduced. TaylorMade answered their critics with their P770 irons, which received nearly 5 stars in the innovation/performance category. This innovative technology utilized an advanced forging process, which not only improves performance, but (like the Callaway Apex irons) offers more of an eye-catching aesthetic. The precision-milled faces and grooves offer that solid feeling off the club face that instantly turns a terrible round into something of beauty. Get used to the “sweet spot” feeling, because the club face offers phenomenal forgiveness.
When creating the P770 irons, TaylorMade wanted to offer a club fit for Tour players and amateurs alike. They specifically focused on two components: technology to optimize ball speed consistency (thus enhancing forgiveness) and a lower center of gravity (which creates a higher launch angle compared to older TaylorMade models). The result is a high-performance iron with improved ball-striking forgiveness and a memorable feel for players of varying skill levels. 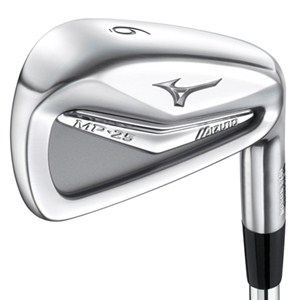 Mizuno MP-25
The Mizuno MP-25 Irons are my top pick in the category of Innovation for 2017. These irons are made from boron-infused carbon steel, which is more durable than traditional steel. Furthermore, the boron allows for a thinner clubface and a slot behind the face that provides additional ball speed. In order to activate the boron, Mizuno designers added a micro-slot to the club face, which gives the club added flex for improved distance. I’ve seen these referred to as a suped-up version of traditional blades. What does this mean for you? Improved shot-shaping abilities and distance without compromising forgiveness.
If transitioning from an outdated set to new irons scares you, the Mizuno MP-25 irons may be the first set you consider. The clubs use traditional lofts, which regulates the distance gap between clubs. You’ll therefore be able to gauge shot distances much more easily/efficiently.
As someone who grew up playing Mizuno Irons, I’m the first to recommend this brand. Mizuno consistently pushes the envelope in terms of innovation without compromising playability. 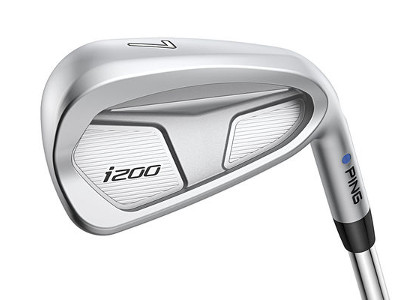 Ping i200
Ping irons have been gaining more and more traction in recent years. Ping’s desire to offer forgiving irons at a great price is shown once again in their i200 irons. This new model has a smaller clubface compared to models from years prior. The weight saved from the smaller club face was redistributed to the hosel and toe areas of the club, which, amazingly, offers even better forgiveness compared to previous models.
The i200 irons are crafted from stainless steel for optimum strength and durability. While some clubs focus on one or two factors, like distance and spin (for example), the Ping i200 irons aim to offer a happy medium among power, precision, and feel.
Not only does the weight distribution (from the club face to the hosel/toe) offer better ball-striking, if you find yourself in the deep rough, you will have an easier time keeping the club square through impact.
Ping also utilized a hydropearl chrome finish on the club faces to repel moisture for improved surface interaction and crisper shot-making abilities.
Additionally, the irons are manufactured with a concealed soft elastomer insert that activates at impact, providing instant vibration damping for unprecedented feel off the club face.