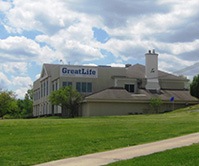 The Leavenworth Golf Club is many things for many people – and it does them all very well. It’s an enjoyable course for a relaxing round of golf. It’s a place for stress-relieving fitness. And it’s a welcoming environment for post-round socializing.

“With GreatLife, what we’re trying to do is provide a family membership at $49.99 that can offer golf, a fitness center, and the pool,” said General Manager Eric Pickrell. “(Interest in) golf has gone downhill the last couple of years. We’re trying to get families out here with more kids. At $49.99, you can play here or any of the other courses that are Premier or SelectPlus with no green fees, just cart fees. It’s for any family, husband and wife, with kids living at home up to age 24.”

There are twenty-three GreatLife member locations overall, most of which are in the Kansas City area. While each includes fitness center access, along with golf, for a single family membership fee, each location also has its own special features.

For Suzy Fehseke, a member of the Leavenworth Golf Club since 2010, it’s a golf course that can be played repeatedly without losing interest.

“It’s a course that you can play a few times and not get bored with it,” she said. “You can look at a hole and see that there are a bunch of different ways to play it. There are a lot of beautiful old trees and it can play differently from the different tees.”
Longtime member Chuck Estez likes the challenges that the Leavenworth Golf Club offers.

“There are a few good doglegs,” he said. “Number 3 is a hard, almost 90-degree dogleg left. Number 4 is a 90-degree dogleg right. And Number 11 is a hard dogleg left. You’ve got to control your shot, but there are some easy holes, too. It’s a playable course for even a 28 handicap. The course doesn’t hurt the amateur golfer, but it has some challenges.”

Key among those challenges is water that comes into play on a number of holes. But, as Fehseke pointed out, golfers can learn to avoid them and play away from them. With no long forced carries, the course remains very playable for all skill levels. 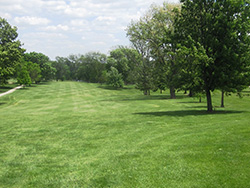 At only 5,879 yards, the par-70 course is not long, but that adds to its charm, according to those who play it regularly.

“People will tell you it’s not the longest course,” Pickrell said. “It’s pretty short and there are very neat holes as far as yardage. The water comes into play and there are doglegs. You have to make some golf shots. You can’t just take out your driver and bomb away.” He went on to point out that with mature trees and an old-style parkland setting, golfers simply can’t spray the ball outside of every fairway and expect to score well.

“I would say number nine is probably the biggest challenge,” he said of the picturesque hole. “Par three, hitting over the pond can be hard.”

The Leavenworth course has undergone significant changes from the years when it was a private clube known as the Leavenworth Country Club, and it is still in a refurbishing phase. Estez chronicled the history a bit, noting that as a private club, there was significant investment in maintaining the greens and fairways. However, as the membership dwindled, so did that investment and the course suffered as a result. That changed when GreatLife rescued the golf course.

He explained, “They are starting to put some money into it, taking care of things like they should. But it’s not an overnight deal. It takes a while and the grounds guys are doing everything they can to put it back to where it needs to be.” 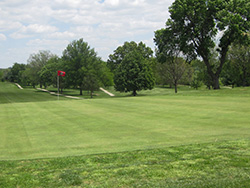 Fehseke agrees with that point of view, “Eric has been doing a great job bringing it back up to snuff. The drought was no fault of GreatLife. They are doing a good job of bringing it back.”
Key to turning around the golf course, and its appeal to golfers is a plan that Pickrell has put into place. That plan, after a few years of drought, has management of water resources as a central component.

“We just got a bid from CE Golf Design to renovate our ponds,” said Pickrell, who began his career with GreatLife in 2006 as a superintendent at River Oaks. “It’s a futuristic outlook. We’re on city water and we want to pump our own water. The financial game plan is to do that on our own. We’re dredging out the smaller ponds to let them flow to the lower, main pond where we can pump our own water. Water is such a huge resource and it can save us a lot of money to pump our own. The irrigation system is good, but there are underlying things that a year down the road could be great. It takes a while.”

Of course, water management isn’t the only part of his plan. He also recognizes a need to focus on marketing, public relations, and using those disciplines to reach out to the greater community in and around Leavenworth.

“A lot of these tournaments are in their initial phases,” he said. “As newer tournaments, we’ve had fairly low turnout, but you’ve got to start somewhere. We’re raising money and building these relationships, and we hope to build them into big tournaments.” 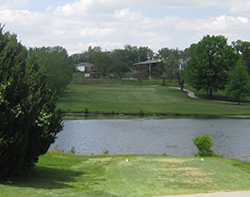 Establishing win-win relationships like those with his tournament organizers and beneficiaries is just one way Pickrell proves he believes in doing things right.

“To me, coming up here from River Oaks, it was a little bit of an adjustment,” he said. “But basically, it’s just taking your daily practices and making them routine. Getting the grounds crew doing what you want done. Everything was a bit scattered when I got here. We’re doing everything religiously with the mowing and other management. A superintendent is his own biggest critic. You know what you need to do and you want to do it the right way.”

Doing it the right way can make Leavenworth Golf Club a great course again. In the meantime, members enjoy a fun and challenging course, along with the fitness center and swimming pool. And the restaurant is a relaxing feature for most members, too. 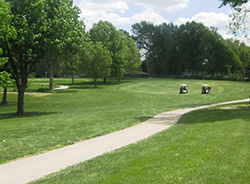 “The restaurant has a huge deck,” said Estez, who sells agricultural chemicals. “On Sundays after playing we’re usually out on the deck drinking beer and watching the other golfers. I’ve invited people to Leavenworth. I’ve done business there. Golf is a good way to do that. Everybody’s relaxed. There’s no tension.”

Fehseke touted the strengthening social aspect of the club and has contributed her own efforts by working hard to rebuild the ladies league. “The club has a great social side of things. We like couples golf on Friday night. It’s usually a four-person scramble. We’ve met a lot of nice people doing that who enjoy the same things that we do. Plus, on Friday nights, it’s $1.50 margaritas and $1 tacos.”

Overall, the Leavenworth Golf Club offers a lot for visitors and prospective members.
“It is such a good location here,” Pickrell said. “It’s such a perfect spot. The amenities are great, with the swimming pool, fitness center, golf and restaurant. It’s a semi-private location where the guests pay green fees and cart fees and get a pool pass. We think if we can get people in the door, they will want to sign up as members.”